Chris Standring, Michael Lington & Jessy J added to KSBR Birthday Bash this Sunday, May 24! Plus, more super-secret performers who cannot be announced until they step on the stage! And, of course, Smooth Jazz News will have a booth there, passing out magazines, selling subscriptions and concert clothing.

Where can you see more than 30 top smooth jazz artists performing live this month? AND, enjoy food and beverage tastings? At the KSBR Birthday Bash & Taste of the Bash in Mission Viejo, California, on Sunday, May 24! Many of the top genre stars donating their performance time to this annual fund-raising event for KSBR 88.5, Saddleback College’s radio station, cannot be announced until the day of the show. However, a few names have started to leak out. So far, confirmed artists include Gregg Karukas, Vincent Ingala, Greg Adams, Chieli Minucci, Melissa Manchester, Paul Brown, Brian Bromberg, Slim Man and East Bay Soul! 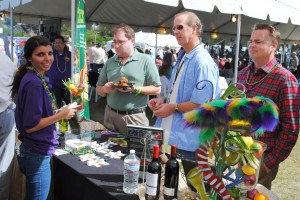 Festivalgoers should be well nourished and hydrated enough to dance into the night when the music starts at 5pm, and goes nonstop until nearly 10pm.

Got your tickets yet? There’s still time to buy them before it sells out.

Gold VIP (assigned table seating in the Gold Circle) tickets are $125 each, and include complimentary dessert and soft drinks and upgraded restrooms.

Premium Gold VIP Table Seating is priced at $165.00 each, and includes complimentary dessert and soft drinks, upgraded restrooms, plus a backstage pre-Bash dinner.

Reserved Platinum VIP Seating tickets are available at $190 person, and include reserved seats directly in front of the stage, preferred parking immediately adjacent to entrance and backstage pre-Bash dinner.

All ticket options include the Taste of the Bash and the concert.

The KSBR Birthday Bash and Taste of the Bash is scheduled for Sunday, May 24, 3:30pm (3pm for VIP guests), at the Village Green of Oso Viejo Park, 24932 Veterans Way, Mission Viejo, California. For tickets or more information, visit www.ksbr.net or call 949-582-4501.